THE EMIGRANTS to premiere on Christmas Day 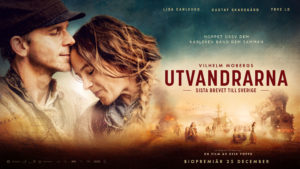 Fifty years after the original Oscar-nominated films with Liv Ullman and Max von Sydow, acclaimed director Erik Poppe is once more bringing Vilhelm Moberg’s epic tale to the screen with THE EMIGRANTS, set to premiere on Christmas Day 2021.

Moberg’s tetralogy is the timeless story of the one and a half million Swedes who emigrated to America in search of a better life in the second half of the nineteenth century. Erik Poppe’s 2021 remake is an ambitious and much-anticipated production by SF Studios, who are co-producing with TV4/Cmore, Film i Väst, Nordsvensk Filmunderhållning, Paradox, SF Studios Danmark and Fantefilm, with additional support from the Swedish Film Institute, Nordisk Film & TV Fond, the Norwegian Film Institute, the Danish Film Institute and DR. REInvent are handling the international sales.

In the lead roles, we will see Lisa Carlehed och Gustaf Skarsgård playing the iconic roles of Kristina and Karl-Oskar, a peasant couple fighting for their family’s survival on a farm in Småland. The cast will also include Sofia Helin, Tove Lo and Lena Strömdahl. Screenwriters Siv Rajendram Eliassen and Anna Bache-Wiig have written the screenplay for this new interpretation of the classic story.

The director, Erik Poppe, said of the film: “I want to re-interpret The Emigrants-series. Their brave decision to leave this country a hundred years ago for the chance of a new life for themselves, and their children. Choices that are just as relevant for many people around the world today. Who we were then, and who has to make these decisions today. That makes the story gripping, seductive and ever-relevant. The film should reflect this, and this time through Kristina’s eyes.”

Vilhelm Moberg’s epic series The Emigrants was first published in 1949 and has gone on to become a modern classic, published in more than twenty languages and considered one of the most important works of Swedish (and we would argue, world) literature. Bonnier Rights manages the Vilhelm Moberg Estate.

The Return of the Mummy

A Beautiful Garden All Year Round

The Last Days and Death of a Scribe

Knorr and Koko and the Number 3

Alba and the Land Beyond

Tweets by BonnierRights
✨New book in at the office today, Åsa Hellbergs

⚡ We were thrilled today to see @pernillaericson

⭐️ RIGHTS SOLD ⭐️ We are happy to announce

🎉 We are happy and proud to announce that Kerst

⚡ HAPPY PUBLICATION DAY to @pernillaericson and

📕📗One of the first books to arrive in the of

🌸A last WOW! this year with the Finnish THE AWE

🌊THE BOOK OF EELS 🌊 by Patrik Svensson, now