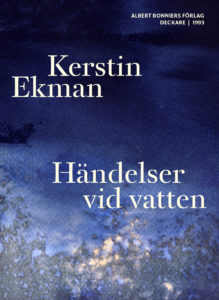 BLACKWATER (Händelser vid vatten) is now in production as a six-part TV-series for SVT, planned for release in 2022. Originally published in 1993, BLACKWATER won that year’s August Prize and the Swedish Crime Writers’ Academy Prize, as well as the 1994 Nordic Council Literature Prize. The iconic crime tale has since been published in 25 countries and continues to attract fresh readers.

The premium crime drama is being produced by Emmy and Bafta-winning producer Piv Bernth (The Killing) at Apple Tree Productions in a co-production with Filmpool Nord and ARD Degato in Germany. ITV Studios are handling the international distribution and have already sold the series to DR in Denmark, NRK in Norway, YLE in Finland and RUV in Iceland.

Filming began in June 2021, in the North of Sweden, at Arjeplog, and is planned to wrap in November. The stellar team behind the production consists of screenwriter Maren Louise Käehne (Queen of Hearts, The Bridge och Borgen), director Mikael Marcimain (Gentlemen, Call Girl, Wallander), and Oscar-winning scenographer Anna Asp (Fanny and Alexander, Wallander). We can look forward to seeing Rolf Lassgård (A Man Called Ove, Exit) in one of the lead roles.

Kerstin Ekman is one of Sweden’s greatest living writers. She has published more than twenty-five books, that have been translated into more than thirty languages. In 1978 she was elected to the Swedish Nobel Academy and left her chair formally in 2018. With BLACKWATER, she invented the genre of the atmospheric crime novel, combining the dark suggestive power of nature with suspenseful crime elements.